Our company was founded in 1982 by Steve Mansfield, who is still the owner/operator. It was initially named A-1 Landscaping of Orlando, Inc. Steve Mansfield is from Central Illinois where he grew up in 5 boy's homes and 17 foster homes. He moved to Orlando in 1980 and after a couple of years of sleeping in and out of his car as well as flophouses, and working in labor pools for $25.00 per day, he realized he needed to develop a plan for a better life. Steve took his $54.00 and a loan from a friend of $600.00 and turned it into a multi-million per year business. He never forgets where he came from and has donated more than 1 million dollars to places he's lived in as well as local boy's homes in Orlando such as Edgewood Children's Ranch.

From 1982-2000 we worked mainly in the Orlando area grossing 2 million per year doing landscaping, sodding, and irrigation. From 2000-2007 we did all the sod, irrigation, grating, and landscaping on new homes as well as existing homes at the Plantation of Leesburg. The project built out in December of 2006, and we stayed until the completion. When we first started with this project, there were four landscapers until three months later, when they narrowed it down to just us. We did 1,700 homes, 5 model homes, and two clubhouses.

Read an article from The Villages Daily Sun about Mansfield Landscaping 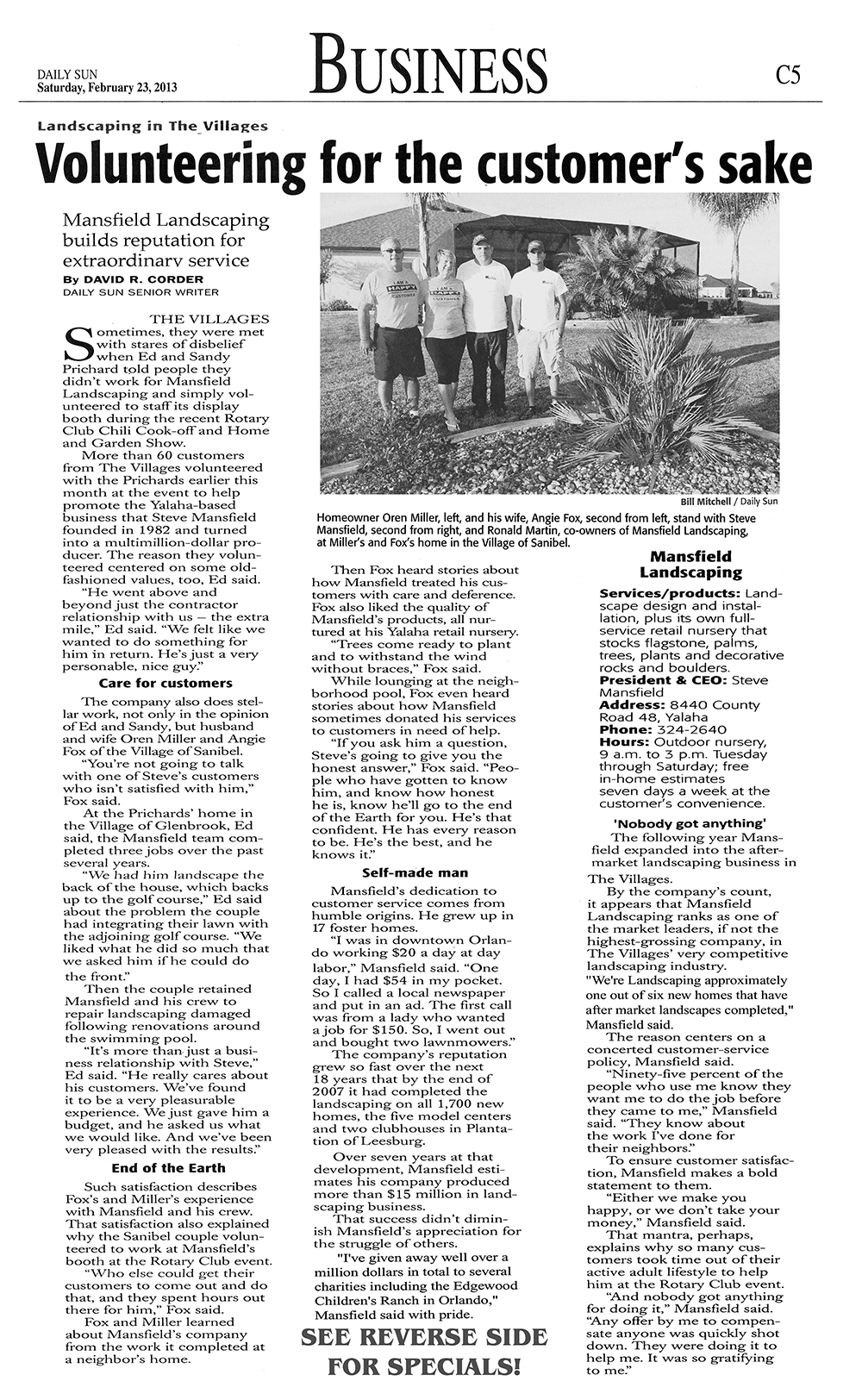 LANDSCAPE PROJECT SAVINGS NOW to February 28, 2023 20% off all jobs given at the time of estimate!

Owner was quick to respond, quick to provide an estimate and communicated nicely. All hired contractors were prompt, courteous and did nice work.

Steve and his team were able to create a backyard Oasis for us! His method seems a little unusual at first (a neighbor recommended them to me and shared what to expect) - but it makes 100% sense because it is all his years of intellectual capital and experience he is offering! We had other landscape designers come out hear our ideas and then take weeks to come back with a proposal (after several follow-ups) and completely miss the mark. Steve comes out listens to what you want first - repeats it back - then offers suggestions to come to a mutual idea. He then draws up the plans on the spot and offers the proposal then and there - leaving us with confidence and excitement. His team was incredible - very kind and professional, while also attentive to detail and skilled in their trades. We are very happy with how everything turned out!!! Thank you Steve and team!

We are very pleased with our new landscape and installation by Mansfield Landscsping We highly recommend Steve and his crew.

Very nicely done! Our entire project was completed inside of two weeks flat!

Workers were extremely proficient and skilled at their jobs. Work was completed expeditiously with care. The completed job was above our expectations.

Owner did what he said he would do. The workers were professional and kind. We are concerned about one bottle brush tree that is not dead but might as well be. We can't call for a replacement but if it dies I will follow up on this reveiw.

A good design that was professionally executed by contractors in a very timely manner. Neighbors go by and tell us they love it !

My initial phone conversation with Steve left me a bit apprehensive. His process of quoting saying, 'don't ask me over, only to get my ideas to bring to the next guy' was different. His straightforward style is different. But once he arrived, heard my plan - only to enhance what I believed I wanted - left me thinking that I didn't need to call anyone else. His experience, knowledge of materials and design really elevated the outcome. His schedule had him ready to go in 3 weeks. His crew was in and out (on a sizeable patio in front of my house plus another outback) in 2 1/2 days. The final product is just amazing - well constructed and great color matching with house. While under construction he suggested a modification that would cost more and improve the project, but he agreed to hold his price. Could I have saved $ by looking at others? I'll never know but I am one who appreciates good service and great quality. For me, I got an excellent value from Mansfield Landscaping and will never question my choice of contractors. 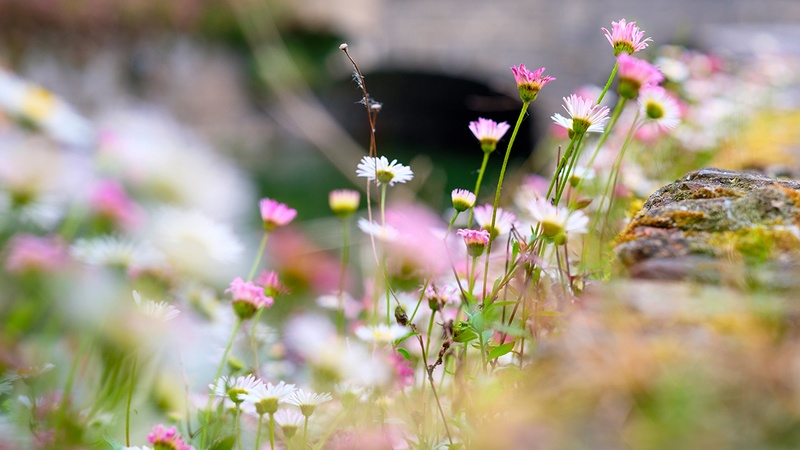 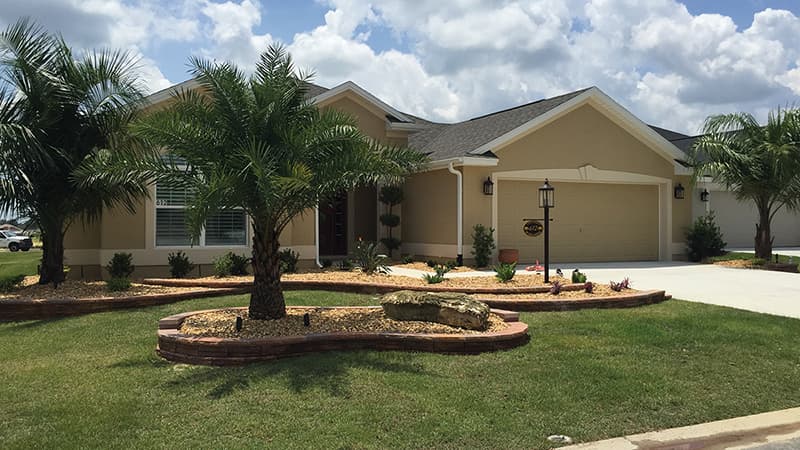 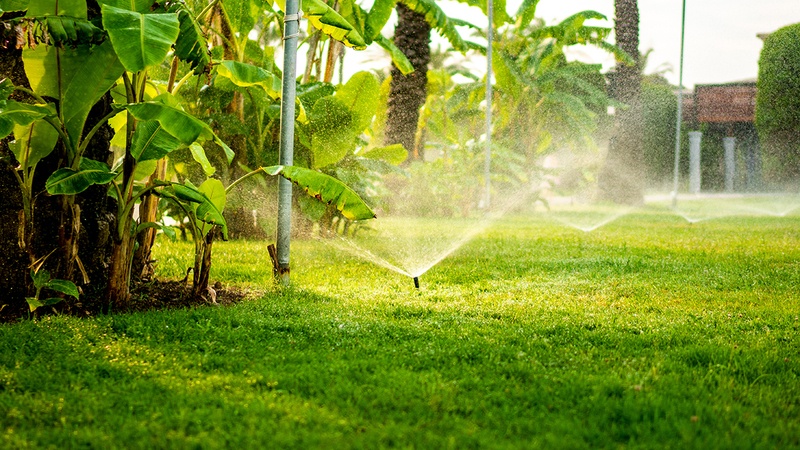 Our Retail Nursery and Outdoor Landscaping Showroom is open when the front gate is open or by appointment only.